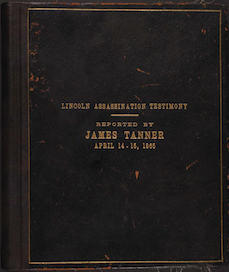 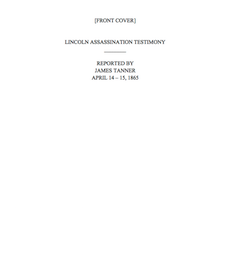 Digital transcription of The
Tanner Manuscript for easier reading

In 1865 Corporal James Tanner was a disabled Civil War veteran working as a clerk in the Ordnance Bureau of the War Department and living in an apartment next to the Petersen House in Washington, D.C.

On April 14th, President Abraham Lincoln was shot during a theatre performance at Ford’s Theatre. The mortally wounded President was taken to the Petersen House. Because he had stenography skills, Tanner was called into the Petersen House. While Lincoln lay dying in the bedroom, Tanner sat in the parlor and recorded eyewitness testimony as given to Secretary of War Edwin Stanton and David Kellogg Cartter, Chief Justice of the Supreme Court of the District of Columbia.

The interrogation of the witnesses took place between midnight and 1:30 A.M. “In fifteen minutes I had testimony enough to hang Wilkes Booth, the assassin, higher than ever man hung” noted Tanner. While still in the parlor, Tanner transcribed his shorthand notes into longhand, finishing his task at 6:45 A.M.